You are here: Home / News / Afghanistan / 8 U.S. troops killed in battle with militants in Afghanistan 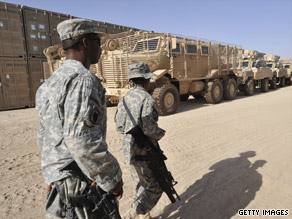 Source: KABUL, Afghanistan (CNN) — Hundreds of militants attacked American and Afghan troops in eastern Afghanistan on Saturday, opening fire on an outpost from multiple locations with rockets, mortars and heavy-caliber machine guns, according to an initial U.S. military report on the battle.

At least eight American troops and two members of the Afghan National Security Force died — the largest number of Americans killed by hostile action in a single day in more than a year, according to CNN records.

At least 13 Afghan police officers were captured in the attack, according to Haji Abdul Halim, the deputy governor of Nuristan province, where the battle took place.

The fighting lasted about 12 hours, with the militants firing down on the joint U.S.-Afghan outpost from ridgelines above the base, a senior U.S. military official with direct knowledge of the first reports told CNN. The official said the report was preliminary and subject to change as more information came in.

Read the entire story at CNN >>

Pray for our troops and give a moment of silence for those who lost their lives todat.