You are here: Home / Resources / A Soldier’s Hike for Our Heroes 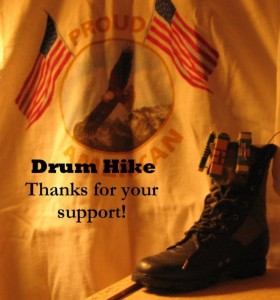 When SPC Troy Yocum came home from Iraq, he had just one thing on his mind: hike 7,000 miles across America while drumming to raise $5 million for Military families.

Starting April 17th, 2010, Iraq war veteran Troy Yocum will hike daily for 16 months to spread the word that help is needed. His plan is to drum up support in various ways with a great team backing him up!

Troy will be hiking though 37 major U.S. cities and hundreds of small towns with his loyal dog Emmie (Emerson Elaine Eskridge the Superdog) at his side. They will hike through 20 baseball stadiums and be joined by support groups throughout the journey. Troy’s hike will also be streamed live on the Internet – through DrumHike.com, and pinpoint his location in real time on Google Earth. Stay tuned for the book, a film, and events organized by his team and volunteers around the nation.

Why is Troy doing this? Troy is responding to the needs of our nation’s warrior citizens. In the last 6 years over 19,000 Military families have applied for assistance and nearly 50% of those soldiers have been helped. By spreading awareness he hopes to save the homes and lives of his fellow brothers and sisters in arms. “They have fought for us, and now I will fight for them. If I reach the goal of $5 million then many families will 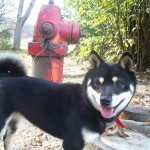 Find out more about how you can help at http://drumhike.com
Support Drum Hike on Facebook: http://www.facebook.com/HikeForOurHeroes
Find out how Emmie is doing her part for our Nation’s heroes!