You are here: Home / Deployment / B-Huts – A Place to Hang Your Hat in Afghanistan

My son, currently deployed to Afghanistan, referred to his living quarters as a “hut” that housed 8 people. His explained that his space in this “hut” was very tiny and he didn’t have much room to store anything. Being curious and without photos from my son, I set out to learn more about B-Huts, the current standard of housing in Afghanistan for many deployed soldiers.

B-hut refers to a type of semipermanent wooden structure, used as a replacement for a tent, primarily in Afghanistan. I found some random pictures on the Internet in case you are wondering about B-Huts too! 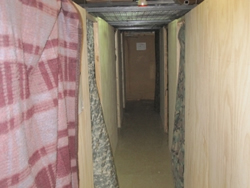 B-huts usually house up to eight single persons, but can contain more if required. It is made of cheap plywood and divided up into 2, 4, 6, or 8 separate rooms, or left “open” containing one large space. A typical B-hut usually has two entrances – one at each end of hallway – with a small air conditioning unit above each door. Each room – off the hallway – usually has a window which the occupant usually nails shut for climate control purposes.

B-huts offer a small amount of privacy to the occupant in allowing him/her to have their own room – an opportunity rarely afforded to deployed personnel. 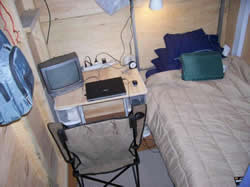 B-huts require constant maintenance and are only expected to last three or four years. It is important that occupants of this structure keep their living areas clean and free of open beverage or food containers as vermin can easily gain entrance.

Why are they called B-Huts? I didn’t find an official reason but it’s rumoured that the “B” comes from B grade housing – non permanent. Just a bunch of plywood nailed together in the shape of a building.

Most troops live in B-huts – usually an 18-by-36-foot structures. They are cheap to build, go in quickly and will fit anywhere.

Now I understand where and how my son will be living for the next year. When I chat with him on Skype, I can picture him in a tiny space surrounded by plywood. When he tells me not to send too much food because he cannot store it in the B-Hut, I understand why. This is Afghanistan living.

This is a video I found on the Internet. I do not know this soldier but thankful that he posted this video so I could get a better idea of the living quarters.