You are here: Home / Deployment / Combat Outpost Living in Afghanistan and Iraq 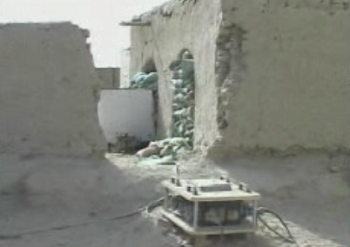 Combat outposts (COPs) in Afghanistan and Iraq refer to something like a patrol base to anything smaller then a Forward Operating Base (FOB). An FOB is any secured forward position that is used to support tactical operations. Troops in combat outposts are based out of larger forward operating bases.

No two COPs are alike. For example, one outpost in Afghanistan is housed in an abandoned former district agricultural building in an Afghan village. This one is comprised of a mud building that started out abandoned and cold with no electricity or water. Like most outposts in Afghanistan, conditions are stark. The troops build up the outposts, securing them before adding comforts like heat.

In contrast, another outpost sits at the edge of a plateau 7,700 feet above sea level. This outpost is surrounded by mountain ridges rising several hundred feet higher.

Troops are usually helicoptered into an outpost because the roads traveled are too dangerous or there is no other way to get there. Helicopters deliver supplies as often as possible but depending on weather conditions, choppers can’t always get there regularly.

Soldiers are usually rotated into outposts for about a month at a time, but it depends on the situation and mission.

Food is usually in the form of MREs (Meal, Ready-to-Eat). MREs are self-contained, individual field rations in lightweight packaging for use in combat or other field conditions where organized food facilities are not available.

This video below features the life of Marines on a combat outpost in Afghanistan. They have no running water and eat heated tray rations or MREs. They make do with water in a bag for a shower, and laundry is a do-it-yourself operation using a bucket. There are no amenities in this outpost as the Marines spend most of their time patrolling the area.