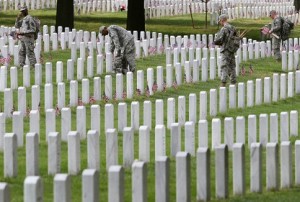 Memorial Day is a day of remembrance for those who died in service to our nation and about coming together to honor those who gave all. Originally it was called Decoration Day.

On May 5, 1868, Memorial Day was officially proclaimed by General John Logan, national commander of the Grand Army of the Republic, in his General Order No. 11. The first time this day was observed was May 30 1868, when flowers were placed on the graves of Union and Confederate soldiers at Arlington National Cemetery. New York was the first state to officially recognize the holiday was New York in 1873.

It is now celebrated in almost every State on the last Monday in May (passed by Congress with the National Holiday Act of 1971 (P.L. 90 – 363) to ensure a three day weekend for Federal holidays), though several southern states have an additional separate day for honoring the Confederate war dead: January 19 in Texas, April 26 in Alabama, Florida, Georgia, and Mississippi; May 10 in South Carolina; and June 3 (Jefferson Davis’ birthday) in Louisiana and Tennessee.

Traditional observance of Memorial day has diminished over the years. Many Americans nowadays have forgotten the meaning and traditions of Memorial Day. At many cemeteries, the graves of the fallen are increasingly ignored, neglected. Most people no longer remember the proper flag etiquette for the day. While there are towns and cities that still hold Memorial Day parades, many have not held a parade in decades. Some people think the day is for honoring any and all dead, and not just those fallen in service to our country.

Since the late 50’s on the Thursday before Memorial Day, the 1,200 soldiers of the 3d U.S. Infantry place small American flags at each of the more than 260,000 gravestones at Arlington National Cemetery. They then patrol 24 hours a day during the weekend to ensure that each flag remains standing.

In 1951, the Boy Scouts and Cub Scouts of St. Louis began placing flags on the 150,000 graves at Jefferson Barracks National Cemetery as an annual Good Turn, a practice that continues to this day. More recently, beginning in 1998, on the Saturday before the observed day for Memorial Day, the Boys Scouts and Girl Scouts place a candle at each of approximately 15,300 grave sites of soldiers buried at Fredericksburg and Spotsylvania National Military Park on Marye’s Heights (the Luminaria Program). And in 2004, Washington D.C. held its first Memorial Day parade in over 60 years.

To help re-educate and remind Americans of the true meaning of Memorial Day, the “National Moment of Remembrance” resolution was passed on Dec 2000 which asks that at 3 p.m. local time, for all Americans “To voluntarily and informally observe in their own way a Moment of remembrance and respect, pausing from whatever they are doing for a moment of silence or listening to ‘Taps.”

On January 19, 1999 Senator Inouye introduced bill S 189 to the Senate which proposes to restore the traditional day of observance of Memorial Day back to May 30th instead of “the last Monday in May”. On April 19, 1999 Representative Gibbons introduced the bill to the House (H.R. 1474). The bills were referred the Committee on the Judiciary and the Committee on Government Reform.

Let us remember and honor those service men and women who made the ultimate sacrifice for our nation. Amen.