You are here: Home / Learn / Special Skills and Precision for Air Assault Missions 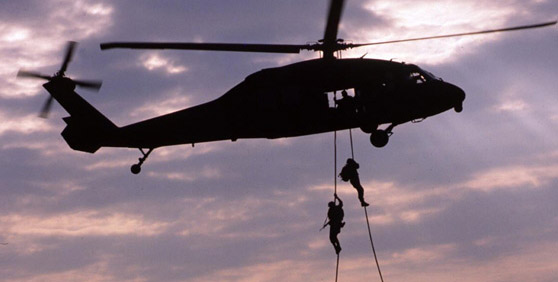 Air assault missions are a means of moving troops by helicopter into battle. These operations are conducted with speed and precision by a well trained team.

Typically BlackHawks (UH-60) and Chinooks (CH-47) are the helicopter used for air assault missions and they are accompanied by air support armed helicopters like Kiowa Warriors (OH-58) and Apaches (AH-64).

Preparation for air assault is tough, and includes rigorous training on aeromedevac operations, slingload rigging, and rappelling. Air assault troops must know how to efficiently exit and enter helicopters fast so the helicopter can be in the air as quickly as possible. Helicopters are too vulnerable on the ground.

If the helicopter hovers instead of landing, then troops must rappel out of the helicopter safely and quickly to the ground. This is a troop insertion technique during which soldiers can exit their helicopter while it is still airborne at up to 100 feet. Not an easy task, especially when dust and debris is kicking up all around from the helicopter rotors.

Once the troops are on the ground, they must immediately secure the area around them for safety. They stay in contact with the armed helicopters in a well coordinated mission. Communications and following instructions are crucial to the success of these missions. If the mission is conducted over several days, the Chinooks return to resupply the troops with water, food, and ammo.

The air assault video shows you even more skills that our amazing troops use for air assault missions.