You are here: Home / Deployment / Assault Breacher Vehicles in Afghanistan 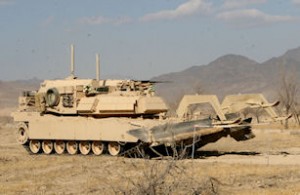 There’s a new assault vehicle in town, watch out for the Marine Corp’s Assault Breacher Vehicle (ABV), AKA – “The Shredder.” Cool video below!

The Breacher is a force to be reckoned with that became operational in Dec. 2009. The Marines used it to during Operation Cobra’s Anger, an operation in northern Helmand Province Afghanistan that focused on cutting off enemy supply and communications lines to the north.

That was just the beginning. Marines headed to the Marjah battle in Helmond province with Assault Breacher Vehicles. According to Brig Gen. Larry Nicholson, Marines commander in southern Afghanistan, “This may be the largest IED threat and largest minefield that NATO has ever faced.”

When an Assault Breacher hits and detonates a mine or IED, the Breacher hardly shudders!

“The Shredder” looks similar to bulldozer and tank and weighs in at 72 tons with a length of over 40 feet. It includes a plow and nearly 7,000 pounds (3,175 kilograms) of explosives.

This $3.75 million machine is designed to safely clear minefields and improvised explosive devises (IEDs) that the enemy has planted ahead of time. Breachers have powerful capabilities like firing rockets carrying high grade C-4 explosive up to 150 yards forward, detonating the hidden bombs at a safe distance so that troops and vehicles can pass through safely.

ABVs are operated by combat engineers. Watch out – the Breacher is coming! Watch this amazing video of the latest assault vehicle! I’ve never seen anything like it!