You are here: Home / Families / Create New Holiday Traditions when your Child Joins the Army

That first year my son joined the Army, we missed him so much at Christmas. He spent his holiday at his duty station in Germany, while the rest of us celebrated a traditional Christmas at home.

Knowing that the Army was his chosen career, the future years of Christmas, other holidays, and birthday would not be the same. Instead of being sad, we found new ways to celebrate! 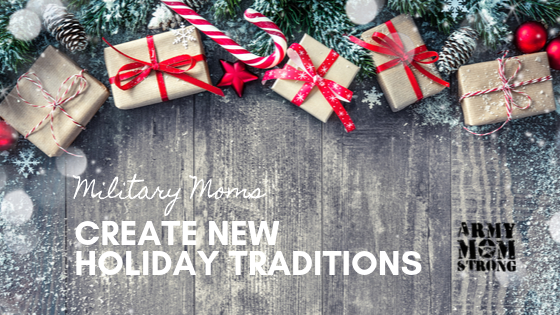 From Christmas in mid-November combined with a Thanksgiving dinner and all the holiday cheer, to birthdays celebrated when we could. Our family found unique ways to celebrate and create new holiday traditions!

When I let go of how I thought the holidays “should” be, and we started creating our new way to holiday, life became a lot easier, and wonderful.

We did the same thing! If my son couldn’t be home for Christmas and couldn’t come home until March, we would do Christmas in March with Christmas stockings, some little decorations, definitely his gifts, and a great traditional meal!

Since the Holidays are the season of giving, I felt closer to my Soldier by sending small boxes of homemade cookies personally to those he was close too, especially if there was someone who didn’t particularly get a lot of mail.

When our child was deployed over Christmas we kept the tree up. We kept birthday and Christmas gifts under the tree until he came home. We also had a full course Christmas supper then as well.

He was gone for Thanksgiving as well. These were our first missed holidays as this was the first deployment. Yep, I cried behind the scenes. I pulled it together in front of family. They felt the void as well. We stayed cheery when we talked with him.

My army child joined when he was 18. It was August when he left and he graduated Basic Training in November. Normally, I would have planned the Christmas holiday to the last second by October….not that year.

He got through basic within the time frame first projected. Great I made it through basic….just. I was a nut job that now cried at the drop of a hat, but we made it. As soon as we returned home from watching him march out, my thoughts turned to Christmas and it hit me like a ton of bricks.

Was he going to be home for Christmas? Turns out he was home over the holiday period, but not on Christmas Day. He was issued with guard duty. We celebrated a little later than usual that year.

From there he has been posted interstate and this was his first year doing the actual job he had trained for. By October I was asking him about Christmas (since we had a little bit more control than last year) but again, he wasn’t coming home. Instead, he covered guard shifts for his fellow soldiers with young families so they could be home with theirs.

So no Christmas Day with him again. After two Christmases missing my son,  I felt a massive hole in my heart, but had to try to enjoy it for the other two boys at home.

Easter was creeping along and he said he would come home for a week. I couldn’t resist putting the Christmas tree up again… yes, in April!

A new tradition was born! I told my husband that’s what it is called now. He just nodded. The kid arrived safely and I got my family of 5 Christmas photos in the month of April. It didn’t faze the army child, he actually thought it a bit strange, but sometimes as an army mum, you do what you have to do to make yourself get through the family unit breaking up a little easier.

Having my 4 boys under the same roof feels amazing, but having a Chreaster Day photo to remember it all by it the very best.

Just 5 days ago, my workplace were sorting out the Christmas holiday shifts and I absolutely broke down sobbing, because again, there were no guarantees that my Army son would be home for Christmas. But, it’s OK because now we have Chreater Days. No matter when he comes home, any time throughout the year, the Christmas tree will go up again and this young military family will celebrate that he does come home.

We are the lucky ones.

Thoughts about Creating New Holiday Traditions When Your Loved One Serves

Thanks to these moms of soldiers who gave some great ideas of creating new holiday traditions.

Our military children aren’t always able to come home for Christmas but you can still find unique, new ways to celebrate holidays and other special occasions.