War dogs have been around since the Egyptians viciously used them against their enemies in 4,000 BC. War dogs were at the sides of soldiers throughout time. Roman leaders dressed them in armour and used them to throw the enemy off their horses. In the 18th century, Napoleon saw these dogs usefulness as guards and in WWII, war dogs were used to search the fields for wounded soldiers.

Although war dogs have and continue to hold various military jobs, the most unique of those is that of parachuting out of perfectly good airplanes. As early as World War II, the British dropped dogs by parachute to take messages behind enemy lines and the Canadians used parachuting Huskie dogs to help rescue downed pilots.

Back in 2008, the British Army was training German Sheperd dogs to jump out of airplanes (perfectly good ones) at 25,000 feet. These dogs will be trained in tandem type jumps with human parachuters while wearing oxygen masks. After touchdown to dangerous territories, the dogs would be fitted with small cameras attached to their heads so they can gather intelligence. This can alert special forces team about potential ambushes or enemy locations via live footage transmissions. The main objective of this elite canine squad is to reduce casualties.

Fast forward to 2009, when military working dog, Sgt. Maj. Fosco made a successful parachute jump from an altitude of 12,500 with his partner, First Sgt. Christopher LaLonde. 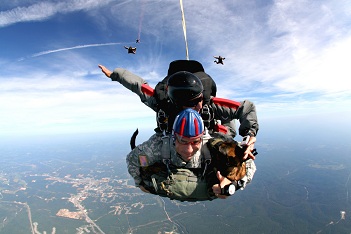 It was Sgt. Maj. Fosco’s second jump during the week-long Military Police Warrior challenge, which featured three-soldier MP teams from around the world going head to head in several competitions. The competition also involved tower climbing, target shooting, and written tests. It ended with a 15-mile march while the MPs carried 60-pound rucksacks.

Fosco’s “real” job is as mine detection dog. Fosco and his partner, LaLonde and Fosco are stationed at Lackland AFB, Texas.

Take a look at this amazing video – history in the making of Sgt. Maj. Fosco making his second successful jump!