You are here: Home / Resources / Restrepo – The Movie – Go See It 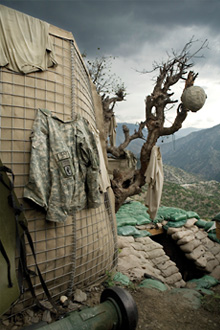 Restrepo is a film documentary by Sebastian Junger and Tim Hetherington. Filmed in Afghanistan’s Korengal Valley, this documentary focuses on a 15-man outpost named “Restrepo”, after a platoon medic that was killed in action. Restrepo was considered one of the most dangerous outposts in the U.S. Military.

This movie is the real deal. The film makers take you on the journey with 15 men of the 173rd Airborne brigade. You will feel like you are on the deployment with these Soldiers, who are dedicated to getting the job done.

When I first heard about Restrepo, I wanted to see it but was hesitant. With my son in Afghanistan, seeing this movie could be upsetting to me. I decided to go anyway with a couple of other Military Mom friends.  I chatted with my son about it and he advised me to read the book “WAR

“, author Sebastian Junger gives an unforgettable portrait of these men under fire in Afghanistan’s Korengal Valley.

I went to the movie expecting to be very upset. We came prepared with Kleenix, knowing that tears could very well be part of this evening.

Restrepo can only be described as an excellent and tastefully done documentary about the worst parts of war. I could not take my eyes or attention from the 90-minute film. The courage, strength, and camaraderie of these Soldiers was nothing short of amazing. The filmmakers captured the experience of these Soldiers in such a way, that you really understand what it might be like at a remote combat outpost.

Restrepo gave me a glimpse into what our Soldiers experience in Afghanistan. Did I cry? I did tear up as the movie was winding down.

Go see Restrepo. It’s amazing. Check to see if it’s playing at a theater near you.