You are here: Home / News / Two US Soldiers Killed in Philippine Blast 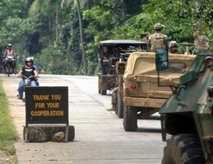 MANILA (AFP) – – Two US soldiers were killed in the southern Philippines Tuesday in the deadliest attack against American troops there since they began helping local forces stamp out Muslim extremists in 2001, officials said.

The explosion struck the troops as they were riding a Humvee vehicle on the outskirts of a town on Jolo island, where the Muslim militant Abu Sayyaf group is active, according to Brawner.

Suspected Abu Sayyaf members set off an improvised bomb near a police station at another Jolo village about 20 kilometres (12 miles) away shortly before the explosion, local police said.

The US military said it believed the Americans were killed by an improvised explosive, and not a landmine, as the Philippine military had first said, which would mean they were targeted for attack, Pentagon spokesman Bryan Whitman told reporters in Washington.