You are here: Home / Deployment / Cell Phones for Soldiers Helps Our Troops Call Home for FREE 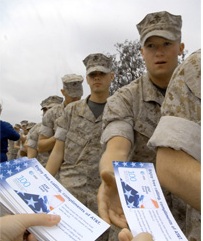 Helping our troops phone home is the mission of Cell Phones for Soldiers (CPFS), started by Brittany Bergquist and her brother Robbie (14 and 13 years old) back in April of 2004.

Through donations and recycling of cell phones, Brittany and Robbie use the proceeds to purchase prepaid phone card and distribute them to deployed soldiers. AT&T donated half a million dollars in phone cards and established drop off locations at each of its 2,000 stores across the country.

Since 2004, this brother and sister have provided more than 60,000,000 minutes of free calling cards thanks to a national network of individual and corporate supporters donating phones and money.

“There are more than 130 million phones retired every year in the United States,” said Robbie Bergquist, cofounder of Cell Phones for Soldiers. “If just 2% of all American’s were to donate their phones, we could supply every troop with a phone as a small measure of the gratitude of a nation.”

Here are some great ways you can help:

You can also visit the AT&T Cell Phones for Soldiers Web site.

Help keep Military families connected – donate a phone! Watch more of Cell Phones for Soldiers Charity and how it is helping our troops around the world!