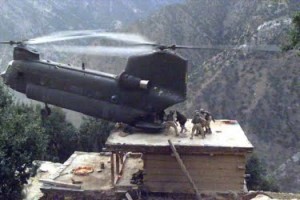 Chinooks are typically escorted by attack helicopters such as the AH-64 Apache for protection. The CH-47D is particularly useful in the mountainous terrain of Afghanistan where high altitudes and temperatures limits the use of the UH-60 Black Hawk helicopters.

When resupplying ground troops in remote mountain areas of Afghanistan, the Chinooks deliver via sling load, dropping off food and water and ammunition. on pallets.

Three machine guns can be mounted on the helicopter: two in the crew door on the starboard side and one window-mounted on the port side.

The main cabin can hold from 33 fully equipped troops to 50 troops, according to the seating arrangements and equipment being carried. For medical evacuation, the cabin can accommodate 24 litters (stretchers). Ramp operations can be carried out on water using an optional power-down ramp and water dam configuration.

The following video was taken during the summer of 2006, where troops spent 18 days on a ridge line to the north of Musa Qah’leh (also spelled Musa Qala) in central Afghanistan. This was Operation Mountain Thrust, where troops performed as a blocking force while other larger elements pushed the enemy toward our position.

Chinooks resupplied us via sling load a half dozen times, dropping off food and water and ammunition. The pallets and extraneous supplies were later used for constructing needed items .