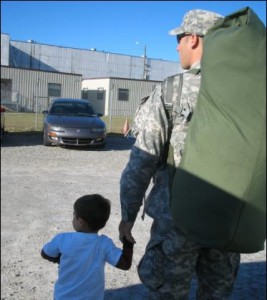 SURREAL – marked by the intense irrational reality of a dream.

I promised myself I would “smile” and work hard to hold back the tears if only to stay strong for my 1 and 3 year old grandchildren. But my tears got the best of me when I thought about the reality of the next year.

We all gathered in the office area where all the soldiers were getting their equipment tagged properly and organized. There were Moms, Dads, wives, husbands, and children, all there just like us…to say  “see ya later”, or to be more exact, December 2010. There were tears and hugs all around us.

We had 90 minutes of family time. Upon leaving, I hugged my son tighter than I ever did before, I just did not want to let go. We hugged for a long time and I told him the only words I could get out as this intense sadness welled up inside me, “stay safe – I love you”.

I cried as I watched him say a long goodbye to his wife.

I would not have chosen this path for my son. But I raised him with this in mind: “”This above all: to thine ownself be true.” A familiar quote. And that is exactly what my son is doing. Being true to himself. Following his passion – serving our great country. Doing a job he loves.

I am a PROUD ARMY MOM. I am the Mother of an America Soldier. Life is changed now. I will lean into it and am there to support my son 100% in his chosen life path. I will pray for his safety and the safety of all our Military that are in harms way.