You are here: Home / Learn / Landstuhl Regional Medical Center, Germany – What You Need to Know

When soldiers are injured while serving in Afghanistan or Iraq, they are first treated at a U.S. Army Combat Hospital at a Forward Operating Base (FOB). If necessary, patients are then transported to a level II military treatment facility (MTF). The closest is Landstuhl Regional Medical Center in Germany.

LRMC is the largest American hospital outside the U.S. and also provides medical treatments to over 245,000 military personnel and their families within Europe. 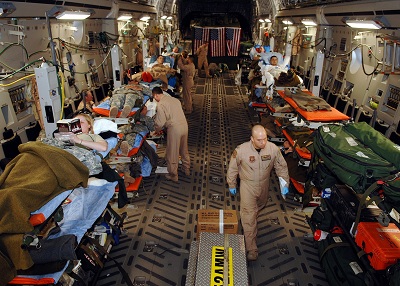 C-17 Globemasters and C-130 Hercules aircraft are commonly used to medevac patients to the hospital in Germany from places like Afghanistan (7 hours) and Iraq (5 hours). The medevac aircraft has specialized medical equipment on-board and specialized personnel that care for the patients during the flight to LRMC. They land at Ramstein Air Base, Germany and are bused to Landstuhl in specialized medical buses.

The medical facilities in Germany are transitional facilities. After a short stay (3 days to 3 weeks), the patients either return to Iraq or Afghanistan or are flown to a medical facility in the US for further treatment.

Is Your Passport Up-to-date?
We hate to think of our soldier getting wounded in action (WIA), but out in a war zone, that is reality. It’s a good idea to have make sure your passport is current in case your soldier is injured and transported to Landstuhl. You’ll want to be at your soldier’s side quickly. It can take several weeks to get a passport. Passport information: http://travel.state.gov/passport/passport_1738.html

Find out more about Landstuhl Regional Medical Center in Germany.

This video shows a C-17 Critical Care transport from Iraq.